Designing the Dimensional Model and Preparing the data for OLAP

Preparing the data for OLAP

The global issues out of the way, the enterprise must begin to focus on the granular design issues. The data in the data warehouse must be prepared for the application of Online Analytical Processing (OLAP) solutions and such preparations will be driven by the business needs of the enterprise.

User requirements and data realities drive the design of the dimensional model. The grain of detail and the type of facts to be included are decided by the business needs and the type of analytics and reports the end user wishes to generate. Maintenance issues and scalability issues determine the type of model created.

Dimension tables define a dimension. A dimension is hierarchical and the nature of the hierarchy is determined by the needs of the group requiring the dimension. For example the time dimension may contain the day, week, month, year and quarter as attributes. A two dimension hierarchy may have customer and area as a dimension. 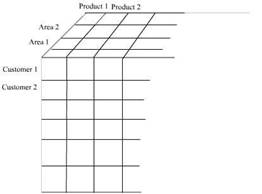 As a safety measure most dimension tables provide for an omnibus attribute called “all” such as “all customers”, “all products”. This is an artificial

category used for grouping the first level category of the dimension and permits summarization of fact data to a single number for a dimension. A hierarchy may be balanced, unbalanced, ragged, or composed of parent child relationships. We will be dealing with these attributes later in the series.

Surrogate keys are keys defined and maintained in the data warehouse to uniquely identify records in the dimension. GUID(globally unique numbers) and Identity keys are sometimes used in data derived from distributed sources to identify them.

Data warehouses may contain multiple fact tables. Each fact table may relate to one particular user requirement or business need. The fact tables are related to the dimension tables relating to the business function in schemas known as star or snowflake schemas. Such business specific schemas may be part of the central data warehouse or implemented in separate data marts.

Measures are values that quantify facts and are numeric. Measures are usually additive along dimensions. For example Quantity by customer, product and time results in a meaningful value. However non-additive values also can exist along dimensions. The quantity on hand measure is a non-additive value. Calculated measures are measures that result from applying a function to one or more measures. An example of this measure is the result of a multiplying price with product quantity.

The logical model of a fact table contains a foreign key column for the primary keys of each dimension. The combination of these foreign keys defines the primary key for the fact table. The type of composite key defined will be determined by the type of partitions required, the load performance needed etc.

The fact table resolves many-to-many relationships between dimensions because the dimension tables join through the fact table.

The granularity of the fact table is determined by the fact content columns that have been identified. Granularity is the measure of the level of detail addressed by the individual entries in the fact table.

The star schema is created when all the dimension tables directly link to the fact table. This is graphically represented as under. 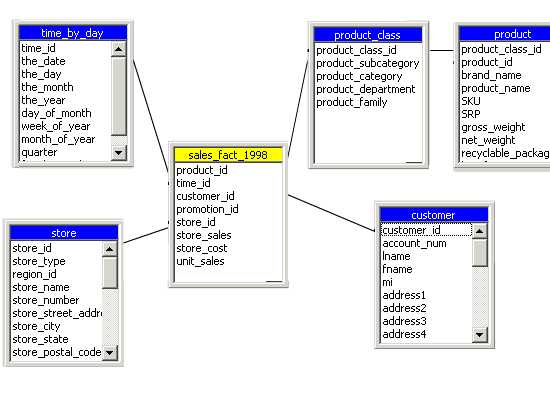 Since the graphical representation resembles a star it is called a star schema. It must be noted that the foreign keys in the fact table link to the primary key of the dimension table. This sample provides the star schema for a sales_ fact for the year 1998. The dimensions created are Store, Customer, Product_class and time_by_day. The Product table links to the product_class table through the primary key and indirectly to the fact table. The fact table contains foreign keys that link to the dimension tables.

Data warehouse structures must be designed to accommodate current and future business needs of the enterprise. It must be scalable enough to accommodate additional demands with minimum of change to the fundamental design of the warehouse. Dimensional modeling has the advantage of being scaleable. It can be expanded by addition of records to dimension tables. New dimensions and schemas can be added with ease. Existing dimensions can be used with the new dimensions without modification to maintain conformity throughout the entire warehouse. If granularity is to be added, dimension tables can be partitioned to granular levels for drilling down operations on the data. OLAP cubes can be extended to accommodate new dimensions by extending their schemas and reprocessing or creating new virtual cubes that contain new dimensions. Existing cubes can be incorporated without modification.

{mospagebreak}
Design of the Relational Database and OLAP Cubes and Data mining tools The next phase in the data warehouse design is the design of the relational database and the OLAP cubes. With this the design phase moves into a more granular level of designing surrogate keys, primary and foreign key relationships, Views, indexes, partitions of fact tables. OLAP cubes are created to support the query needs of end users.

Views are created for users who need direct access to data in the data warehouse relational database. Indexed views are used to improve performance of user queries that access data through views. View definitions create column and table names that make sense to the end user.

The data warehouse reflects the business model of the enterprise and therefore an essential element of data warehousing design is the creation and management of metadata. Metadata is data about data. Many different kinds of metadata are to be created and managed. Administrative metadata includes the information necessary for setting up and using the warehouse. Business metadata includes business terms and definitions, ownership details and changing policy details. Operational metadata stores information that is collected during the operation of the warehouse such as the lineage of migrated and transformed data, the currency of data etc.
Security considerations and backup and recovery plans

It is important to build in adequate security measures into the data warehouse system. The organizations security policy will impact on who can access or view data. Security policies will demand the creation of multiple copies of the data or creation of data views and possible classification of data on basis of security codes.

Closely allied to the security considerations is the backup and disaster recovery plans for the data warehouse.

The key to successful data warehousing is data design as defined by end users. Business users know what they want and they focus upon it. They will determine what data will be needed, where to locate it, how it can harnessed, what dimensions are to be created and what output is expected. The remaining tasks are a natural outcome of the business needs. Therefore, the best data warehouse design naturally and gracefully flows out of the business requirements of the end user.