In this C++ tutorial, you will learn about two interesting types of pointers; void pointers and Null Pointer. These pointers will be discussed in conjunction with syntax, usage and example.

Void is used as a keyword.

Is correct because the address of integer variable is stored in an integer pointer.

If a user writes the statement:

Then this statement produces an error. The address of the float variable is stored in an integer pointer that is incorrect.

Similarly, if the programmer tries to place the address of an integer variable to a float pointer, such as:

The above statement will also show an error.

The Pointer to Void is a special type of pointer that the programmer can use to point to any data type.

Using the above example, the programmer declares pointer to void in this manner:

Using the above example’s definition and assigning the pointer to void to the address of an integer variable is perfectly correct.

Pointer to void, or a void pointer, is a special type of pointer that has a great facility of pointing to any data type. There are limitations in the usage of void pointers that are explained below.

The concept of dereferencing using the operator * has been explained in an earlier section of this tutorial. The programmer must note that void pointers cannot be de-referenced in the same manner. Direct dereferencing of void pointer is not permitted. The programmer must change the pointer to void as any other pointer type that points to valid data types such as, int, char, float and then dereference it. This conversion of pointer to some other valid data type is achieved by using the concept of type-casting (refer to type-casting section of this tutorial).

The above statement denotes exforsys as an integer pointer type that does not point to a valid memory address. This shows that exforsys has a NULL pointer value.

The difference between void pointers and NULL pointers:

A Void pointer is a special type of pointer of void and denotes that it can point to any data type. NULL pointers can take any pointer type, but do not point to any valid reference or memory address. It is important to note that a NULL pointer is different from a pointer that is not initialized.

For example, if a programmer uses the program below:

The output of the above program is NULL POINTER ASSIGNMENT, which will result in: 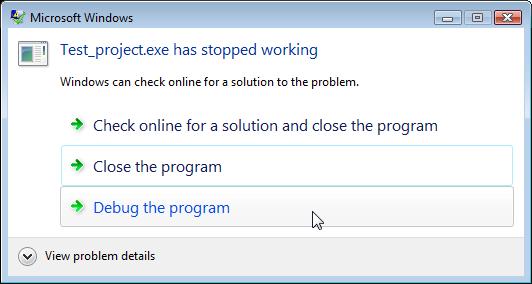 The above program will result in a runtime error. This means that the pointer variable exforsys is not assigned any valid address and, therefore, attempting to access the address 0 gives the above error message.