Basic concepts of OOPS and Structure of C++ program

In this tutorial you will learn about Objects, Classes, Inheritance, Data Abstraction, Data Encapsulation, Polymorphism, Overloading, and Reusability.

Before starting to learn C++ it is essential to have a basic knowledge of the concepts of Object oriented programming. Some of the important object oriented features are namely: 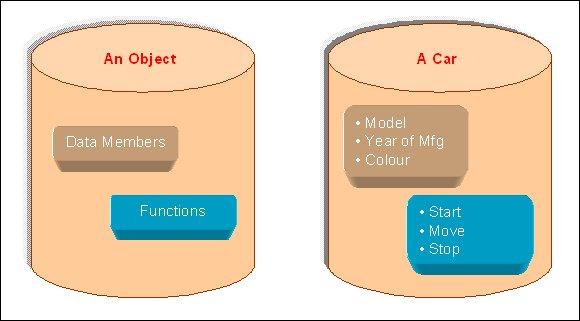 An Object is a collection of data members and associated member functions also known as methods.

Classes are data types based on which objects are created. Objects with similar properties and methods are grouped together to form a Class. Thus a Class represents a set of individual objects. Characteristics of an object are represented in a class as Properties. The actions that can be performed by objects become functions of the class and are referred to as Methods.

For example consider we have a Class of Cars under which Santro Xing, Alto and WaganR represents individual Objects. In this context each Car Object will have its own, Model, Year of Manufacture, Color, Top Speed, Engine Power etc., which form Properties of the Car class and the associated actions i.e., object functions like Start, Move, and Stop form the Methods of Car Class.

Inheritance is the process of forming a new class from an existing class or base class. The base class is also known as parent class or super class. The new class that is formed is called derived class. Derived class is also known as a child class or sub class. Inheritance helps in reducing the overall code size of the program, which is an important concept in object-oriented programming.

Overloading is one type of Polymorphism. It allows an object to have different meanings, depending on its context. When an existing operator or function begins to operate on new data type, or class, it is understood to be overloaded.

This term refers to the ability for multiple programmers to use the same written and debugged existing class of data. This is a time saving device and adds code efficiency to the language. Additionally, the programmer can incorporate new features to the existing class, further developing the application and allowing users to achieve increased performance. This time saving feature optimizes code, helps in gaining secured applications and facilitates easier maintenance on the application.

The implementation of each of the above object-oriented programming features for C++ will be highlighted in later sections.

A sample program to understand the basic structure of C++

A Overview of the Basic Structure of C++ Programming