We have seen in previous sections the different types of operators. Broadly classifying operators are of two types namely:

As the name implies, it operates on only one operand. Some unary operators are named ++ also called the Increment operator, — also called the Decrement Operator, ! , ~ are called unary minus.

The arithmetic operators, comparison operators, and arithmetic assignment operators all this which we have seen in previous section of operators come under this category.

Both the above classification of operators can be overloaded. So let us see in detail each of this.

As said before operator overloading helps the programmer to define a new functionality for the existing operator. This is done by using the keyword operator.

The general syntax for defining an operator overloading is as follows:

Thus the above clearly specifies that operator overloading is defined as a member function by making use of the keyword operator.

Suppose we have a class say Exforsys and if the programmer wants to define a operator overloading for unary operator say ++, the function is defined as 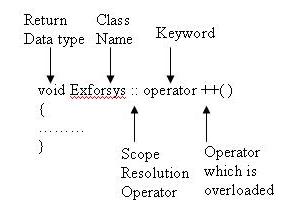 So the important steps involved in defining an operator overloading in case of unary operators are:

The output of the above program is:

In the above example we have created 2 objects e1 and e2 f class Exforsys. The operator ++ is overloaded and the function is defined outside the class Exforsys.