In this C++ tutorial, you will learn about storage classes, types of storage class variables – Automatic, External and Static explained with examples.

In the context of scope of variables in functions exists the important concept of storage class.

What is Storage Class?

is the same as

In the above program, the static variables a is initialized only once in the beginning of the program. Then the value of the variable is maintained between function calls.

When the program begins, the value of static variable a is initialized to zero. The value of the input in is 3 (which is not equal to zero) and is then passed to the function in variable x. The variable a is incremented thus making a as equal to 1, thus, the return of value from function exforsys( ) for the first time is 1, which is printed in the called function.

It is the same case for the second function, exforsys2(), the variable b which is not declared static, is incremented thus making it equal to 1, and the return value for the first time is 1.

The second time the value of the input in is 7 (which is not equal to zero) and is passed to the function in variable x. The variable a (which is declared as static) has the previous value of 1. This is incremented and the value of a is equal to 2, so the return value is now 2.

Thus the output of the above program is: 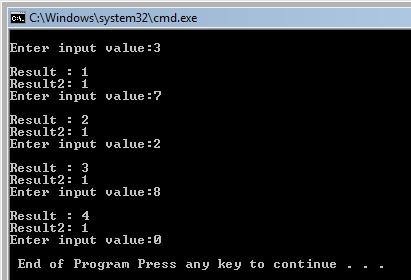