The compiler conditions can exist in any of the three sections (DECLARE, BEGIN, EXCEPTION) of a PL/SQ block. The nature of this condition is different from the one which is involved in the implementation of any business logic. Unlike the IF THEN ELSE construct, the conditional compilation accesses static constants to extract the part of code for compilation. Instead of using non persistent memory variables in a program unit, they use directives to read the database parameters like db version and program compilation flags.

Let’s take up a genuine instance; a support team maintains a 10g production and 10g UAT database server for a retail application. On stakeholder’s request, production database has been upgraded from Oracle 11g. For every new functionality request or application development, support team professionals would design new program units. If the program unit uses version specific feature, developers need to create separate program for testing and production servers. Another option is to create separate copies of same unit with non applicable code commented in each script. Conditional compilation comes as a hopeful activity in such scenarios.

Using conditional compilation feature of Oracle database, a program can be written using the version specific features; thus, taking full advantage of enhancements and additions applicable in that database version. This makes the program independent of the database environment used to run it.

Now, the same code can easily fit into the upgraded production database and older version of testing (UAT) environment. It can be successfully compiled and used in the application mounted on different database versions. One more positive aspect of the feature comes out during database migration. The code can stand stiff and live irrespective of target database.

The feature also lowers down the maintenance and debugging overhead of the program units.

As stated earlier, conditional compilation use directives to access the database and object level compilation parameters. There are three types of directives namely, Selection, Inquiry and Error directives. Besides this directive, Oracle provides certain utility packages for better support and usage of the feature.

The directive is analogous to the IF THEN ELSE construct of PL/SQL. The dollar sign ($) as the prefix serve as the differentiation factor. It can be used at any of the sections of a program unit. If the specified conditions by $IF selection directive are satisfied, the corresponding set of action statements would be evaluated for compilation; else control would move to next $ELSE directive section.

Inquiry directive ($$) is used to access value of the object level compilation flags. These flags are set in KEY-VALUE string format under PLSQL_CCFLAGS parameter.

Compilation flags can be set at system or session level using ALTER [SYSTEM | SESSION] command. The object level compilation settings are synchronized with the session in which they are compiled. Also these flags are initialized with the current session settings every time they are compiled; unless they are altered using REUSE SETTINGS clause. Let’s take a look at this scenario with a small example. 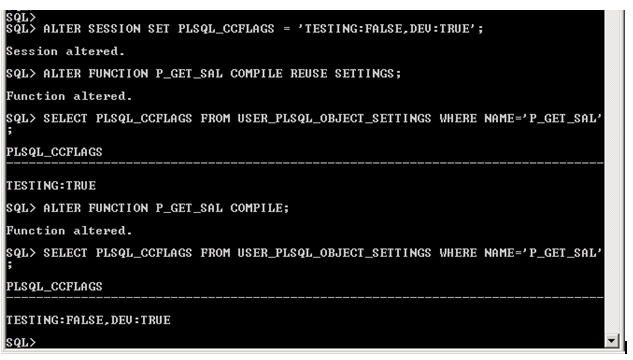 It is an Oracle supplied package, introduced in Oracle 10g Release 2, to hold the persistent and static constants to denote the database versions and its release number. The constants can be referenced externally to get information about the current version, current release, and applicable database version. For demonstration, See the table below shows the values of the constants as applicable to Oracle 11g release 2.

We take up the previous scenario where a support team maintains a testing database in 10g version and development database in 11g version. A new customization requires a new procedure creation.

Result caching feature was introduced in Oracle 11g release. To make use of the feature, programmers design a single procedure and impose conditions upon the compiler to evaluate selected code applicable for their database version.

A function P_GET_SAL has been created which returns the salary of an employee. For 11g environment, it must declare a cursor with result cache feature. On the other hand, for 10g environment, the cursor should be a normal one. Check the compilation conditions in the below function code. It uses DBMS_DB_VERSION constant to get the database version.

Before that, you will need to check current setting of compilation flags.

From now onwards, all the objects created in the current session would inherit the same compilation flags. I shall create a function F_GETSAL_USING_COMP_PARAM, which uses the TESTING flag. Note the usage of inquiry directive.

Inquiry directives can even make use of static packaged variables while defining the compilation conditions. I shall create a package PKG_COND_COMPILE to declare the statics constants.

Note that the packaged variable must be a static constant, else it would raise exception ‘PLS-00174: a static boolean expression must be used’. Refer the below function which uses the package variables.

Demonstrating error directive: An error number can be included under compilation flags using ALTER SESSION command as below.

Now we execute the function in a SELECT statement.

Now, Let’s modify the value of TESTING flag from TRUE to FALSE and recompile the above function to synchronize with the changes. Check, what happens upon compilation.

It is an Oracle supplied package which enables to view the program source code as compiled by the compiler. It displays the actual portion of the code participating in the compilation process, after evaluation of all compilation conditions. 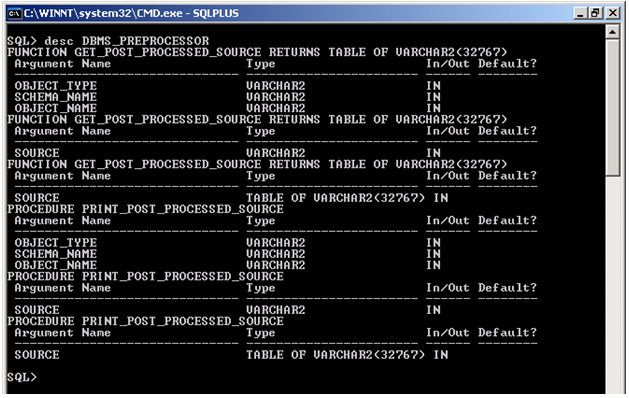 Now, we can print the actual procedure source code as evaluated and compiled by the compiler using DBMS_PREPROCESSOR package.

The snapshot below is the compiled in Oracle 11g database. Note that the non applicable code of the procedure, thus redundant, has been ignored.

The snapshot below shows the code as compiled in Oracle 10g database. Note the changes in the variable declaration and value assignment.