Bug can be defined as the abnormal behavior of the software. No software exists without a bug. The elimination of bugs from the software depends upon the efficiency of testing done on the software. A bug is a specific concern about the quality of the Application under Test (AUT). 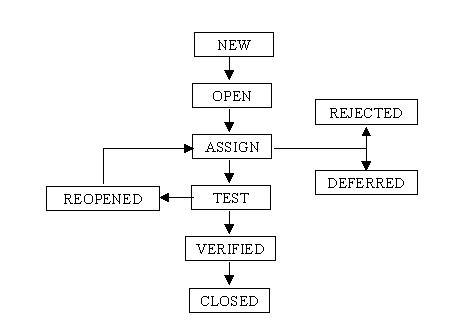 The different states of a bug can be summarized as follows:

1. New: When the bug is posted for the first time, its state will be “NEW”. This means that the bug is not yet approved.

2. Open: After a tester has posted a bug, the lead of the tester approves that the bug is genuine and he changes the state as “OPEN”.

3. Assign: Once the lead changes the state as “OPEN”, he assigns the bug to corresponding developer or developer team. The state of the bug now is changed to “ASSIGN”.

4. Test: Once the developer fixes the bug, he has to assign the bug to the testing team for next round of testing. Before he releases the software with bug fixed, he changes the state of bug to “TEST”. It specifies that the bug has been fixed and is released to testing team.

5. Deferred: The bug, changed to deferred state means the bug is expected to be fixed in next releases. The reasons for changing the bug to this state have many factors. Some of them are priority of the bug may be low, lack of time for the release or the bug may not have major effect on the software.

6. Rejected: If the developer feels that the bug is not genuine, he rejects the bug. Then the state of the bug is changed to “REJECTED”.

7. Duplicate: If the bug is repeated twice or the two bugs mention the same concept of the bug, then one bug status is changed to “DUPLICATE”.

9. Reopened: If the bug still exists even after the bug is fixed by the developer, the tester changes the status to “REOPENED”. The bug traverses the life cycle once again.

Guidelines on deciding the Severity of Bug:

Indicate the impact each defect has on testing efforts or users and administrators of the application under test. This information is used by developers and management as the basis for assigning priority of work on defects.

A sample guideline for assignment of Priority Levels during the product test phase includes:

Bug can be expressed as “Result followed by the action”. That means, the unexpected behavior occurring when a particular action takes place can be given as bug description.